About the North Branch School

The Beginning
The North Branch School began with a group of parents in Ripton who wanted to explore the possibility of creating a small middle school. The original idea centered on creating a rigorous, flexible, and intimate school scaled to the needs of early adolescents, and which incorporated the outdoor, personal reflection, and a close-knit community.

Tal Birdsey was hired in 2001 to develop a curriculum and seek out families for the school. The North Branch School opened in September 2001 in a rented house on Robbins Cross Road in Ripton with twelve students coming from towns from all over Addison County: Salisbury, Lincoln, New Haven, Middlebury, Orwell, Shoreham, Leicester, Ripton, Ferrisburgh, and even Waitsfield and Rochester.

In 2004 the school moved into its own building just down the road and the school population rose to the target number of twenty-seven students—nine kids for each of the three grades. In 2007 the building was expanded to include larger science and math rooms, two small kitchens, a ceramic studio, and a workshop. In addition, students built a nature trail, a bread-oven, and a unicursal labyrinth modeled on the one at the cathedral Chartres. A stone patio was completed along with the only trapezoidal soccer pitch in Vermont, the Doug Walker Field. 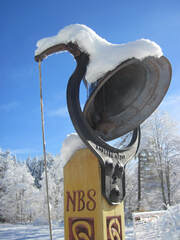 The Name
The name of The North Branch School derives from the brook of the same name originating in the watershed below Robert Frost Mountain, near Ripton. From there it feeds into the Middlebury River, flowing west and north to Otter Creek and finally into Lake Champlain.

As a rising spring gathers and grows to become part of a larger body, the North Branch suggests a sense of motion and confluence, a place of origin and a place of coming together. We see the school as a nourishing element, a way station on a vital journey, a process of living and learning that deepens and broadens in time.

The Building
Our schoolhouse is located in Ripton on the Lincoln Road, 9/10ths of a mile from the Ripton General Store/Rte. 125, and just across from the Ripton Elementary School. The school building is a recycled 1850 post-and-beam farmhouse and was re-erected on our site in the summer and fall of 2003. Designed to allow expansion, we added a wing to the east in 2007. The building is sunny, open and accessible, and divided into various spaces, including two offices, a large meeting/classroom/big-room, a science room, a math room, two bathrooms, and a full basement/workshop/clay studio. The school is in a secluded wooded setting and has a large playing field and student built nature trails, bird path, ponds and gardens in the woods. Alas, we do not have a gymnasium or a swimming pool.

As parents, we try to do right by our children.  Sometimes we miss the mark and other times we really get it right! Our decision to have our son, Ben, spend three invaluable years at the North Branch School is a decision we will never regret.  As both casual observers and from having first-hand knowledgeof the creative chaos that is NBS's secret to success, we witnessed something very special.  Through the extensive writing, critical thinking, and close connections that are formed within the small school, Ben found the challenge that he needed.

As a parent leader for the two significant annual expeditions: the overnight winter ski and the 9th grade Long Trail backpacking adventure, I can testify to the value of the introspective learning and the bonds formed during these physically and intellectually challenging trips. Students build a foundation of leadership, compassion, inner strength and confidence.  They evolve from being timid 7th graders to fully capable, empathetic, citizens of the world.
​
- Chris Huston, Parent of NBS student Ben, ‘18